This KETO Kentucky Pecan Cheesecake Pie is everything you could want in a dessert! Cheesecake, nuts, whipped cream, booze… could you ask for more!  It combines two classic favorites – cheesecake and pecan pie – into one gloriously decadent dessert…guilt-free!

After starting a gluten-free and low carb diet, I started looking at all of my favorite dessert recipes to see how I could literally “have my cake and eat it too!”. I learned that most recipes can be tweaked to reduce the carbs and replace the gluten so we don’t have to give up all of our favorite treats. That’s a win in my book!

I was thumbing thru some old magazines looking for ideas and found a recipe similar to this….but it was definitely not low carb. Many of the ingredients like cream cheese, extract, nuts and of course..Bourbon…are already approved for a low carb diet. The easy part was substituting in a low carb pie crust,  erythritol and low carb brown sugar. The tough part was finding a corn syrup substitute that was sugar-free so I made my own.

This pie has a cheesecake layer, a brown sugar layer and whipping cream to be prepared. The recipe might look complicated, but each layer comes together easily. I found making the crust the most daunting part, but once that is cooling, everything is easy.  Follow the instructions below and scroll down for the full recipe.

Follow the recipe exactly and allow enough time for the crust to chill between mixing the ingredients and rolling out. I like to make the crust the day before to allow enough time to mix, chill, bake and cool the crust. This recipe freezes well, so consider making several in advance. I use foil pie pans and stack the ready made crusts in the freezer to use later.

I like to try to make recipe ingredients myself..if I can. This low carb corn syrup should be made after the pie crust, before mixing the other ingredients. That will allow enough time for it to cool before added to the recipe.

While there is no good non-dairy alternative to cream cheese for making the cheesecake layer, whipping cream is another story. You could omit it entirely, but it is sooo delicious and like the icing on the cake for pies! These are tasty non-dairy, low carb substitutes for whipping cream.

KETO KENTUCKY PECAN CHEESECAKE PIE
SAVE TO PINTEREST FOR LATER 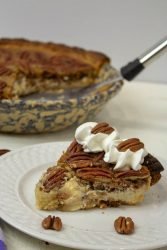 © Copyright Christine Mello for Holistic Yum. We would love for you to share a link to this recipe but please do not copy/paste the recipe instructions to websites or social media. We are happy for you to share a photo with a link back to this website instead.

Holistic Yum is a blog for everyone who wants to improve their health and well-being thru a more holistic approach. Get ready for thoughtful solutions to everyday issues, honest discussions about what ails us and real recipes for your food lifestyle.