Sausage, pepperoni, mushrooms and cheese, smothered in pizza sauce and baked inside a red bell pepper. Fresh pizza taste without the crust!

Low Carb Pizza Stuffed Peppers aren’t anything new, but they’re so tasty having another stuffed pepper recipe must be a good thing, right? This one uses red bell peppers, so the pizza toppings are packed into a sweet and juicy pepper half. It has a few more carbs than green peppers, but the hungry eaters at our house like the taste of red over green pepper…so red it is.

When I started writing about keto recipes, one of the first ones I shared was my Keto Deep Dish Pepperoni Pizza. I got hooked on the pizza flavor, so of course I wanted to branch out for something different and a little healthier. Okay… the sausage and cheese aren’t really what anyone would call healthy…but the red pepper kinda makes up for it.

I like to cut the peppers in half to fill them. It makes the cleaning of the peppers easier, there’s no wasted pepper from cutting off the tops and you still get the pretty green stems.

HOW TO STORE STUFFED PEPPERS

HOW TO FREEZE STUFFED PEPPERS

The most important thing is to cook the meat all the way thru before any stuffing begins. 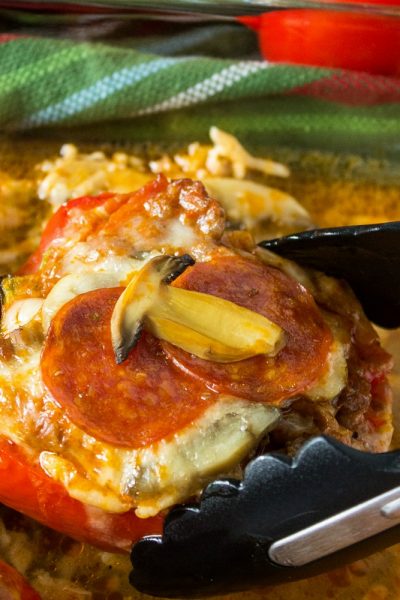 © Copyright Christine Mello for Holistic Yum. We would love for you to share a link to this recipe but please do not copy/paste the recipe instructions to websites or social media. We are happy for you to share a photo with a link back to this website instead.

If you made this recipe, please leave a comment and rating below. I would appreciate the chance to troubleshoot any issues you might have had before you leave the rating!

Holistic Yum is a blog for everyone who wants to improve their health and well-being thru a more holistic approach. Get ready for thoughtful solutions to everyday issues, honest discussions about what ails us and real recipes for your food lifestyle.